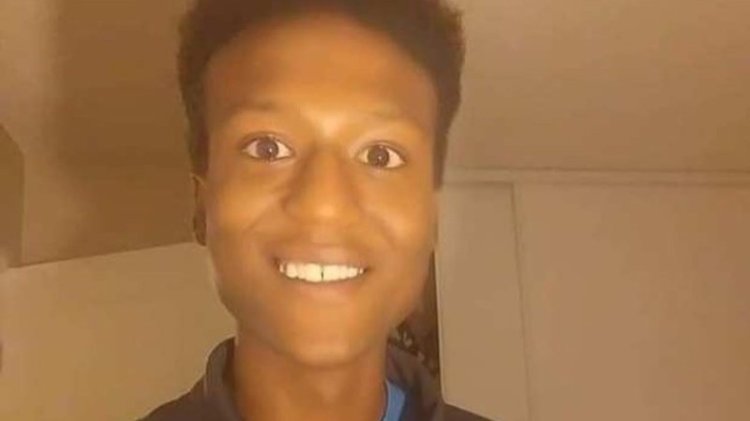 I did not know Elijah McClain personally, but I read that he was listening to music on the “kind of headphones that fit snugly inside the ear.” They say that it was the waving of his arms that caught the attention of a man named Juan who was driving down the same street, and he called 911. What he told the 911 operator was this: “…he looks sketchy. He might be a good person or a bad person.”  Those “mights” were enough for at least four police officers to respond to the scene, and ultimately cause Elijah’s untimely death.

I read that when “a few [police] hands” grabbed Elijah, he recoiled saying “I am an introvert. Please respect the boundaries that I am speaking,” and as the officers pinned him down for several minutes in a carotid hold, he began to moan and sob and plead, and he repeatedly cried out – “it hurt, it hurts!” And after a few moments he began to whimper saying:

A carotid hold is the most widely used type of stranglehold by police officers. To perform this hold,  an officer bends his or her arm around a subject’s neck, applying pressure on either side of the windpipe—but not on the windpipe itself—in order to slow or stop the flow of blood to the brain, as it simultaneously blocks both the left and right carotid arteries, resulting in cerebral ischemia and loss of consciousness within seconds.  Without having known its proper name, we are all too familiar with the carotid hold. For it’s the same stranglehold that led to Eric Garner’s death; preceded by him echoing those unforgettable words that spawned a movement: “I can’t breathe.”  It’s also the same stranglehold that though done using his knee, Derek Chauvin used for eight minutes as he slowly, and with a menacing stare, killed George Floyd.  Not surprisingly, it’s also the same stranglehold that Minneapolis police used to render 44 people unconscious in the past five years.

I read that as Elijah attempted to roll over to vomit, the police shouted -“stop fighting!”  One police officer then threatened him saying – “If you keep messing around, I’m going to bring my dog out here and he’s going to bite you.” He said this as he stood over Elijah, watching him struggling to breath, and vomit began to fill Elijah’s throat, then overflow through his lips.

After he vomited, Elijah then stated weakly – “I can’t fix myself.”  His body went limp and then he passed out.

More than 20 minutes after the police confronted Elijah, he was given ketamine, a strong tranquilizer often described as a date rape drug, he was placed into an ambulance, and suffered cardiac arrest on the way to the hospital. On August 30th Elijah was removed from life support.

It’s not even a year after Elijah’s death, and this morning as I read through the details of what happened to him I wept.  I wept in sympathy for his mother.  She described Elijah as a “responsible and curious child who became a vegetarian to be healthier, and who could inspire the darkest soul.” As the collective, we share in her pain, but her grief is her very own to bear, and to work through.  And she’s spent the past near year of her life grieving the loss of her son Elijah; her baby boy whom she held in her arms for the very first time in the hospital, swaddled in that same blue, pink, and white blanket.  She has spent the past 10 months, meant for peaceful grieving,  fighting for, and waiting on justice.  I wept because my mind quickly wonders what Elijah’s Incomplete Portrait will look like; a mere 23 minutes of color for each year of his life. He will now be among the Stolen, a series of partially filled-in depictions of Black people murdered by police, done by Brooklyn artist – Adrian Brandon. Each portrait remains incomplete as Brandon only colors one minute for each year of the subject’s life before it was cut short.  I wept selfishly, for the countless times that I’ve had to interrupt my son’s innocence, and interrupt his love (like mine and so many others) for good soulful music playing loudly in his ears as he moves and bops and waves his arms around in the air, deeply feeling and gesturing the words of whatever song he is listening to. “PAY ATTENTION TO YOUR SURROUNDINGS!” I typically shout, “You just never know what may happen.”  I wept for the fact that he and I, and every other black person living in the US, knows all to well what may happen. Finally, I wept because if I’m being honest, though it’s only been 10 months, I had forgotten all about Elijah’s story.  Not because it doesn’t carry the same pain and importance of the stories that I do remember, but because there are just far too many stories like Elijah’s, and far too many that we never even hear about.

I buried my weeping eyes in my pillow and muffled myself, so that my son would not hear me.  If he hears me, he will ask me what is wrong. And if he asks me what is wrong, I will have to tell him, yet again, the story of a person who looks like him, whose life was prematurely and unjustly ended, at the hands of police officers and vigilantes.  He will say to me as he said to me weeks ago as we talked through the killings of George Floyd, Tony McDade, Breonna Taylor, Ahmaud Arbery, and Sean Reed, “I’ve already told you mom, I’m numb to this.” Those words, will then yet again, pierce through my heart like a newly sharpened sword. And I will feel like I, my son’s father, our entire circle of family and friends which we refer to as our village, and this entire america, has failed him; because we have.

My son was seven years old when I told him through tears what had happened to Trayvon Martin.  Every day for a week when he came home from school, he’d put on his hoodie and just sit with the hood on his head.  Since then, the list has grown longer, the pain of it all cuts even deeper.  We continue to march. We continue to Pray. We continue to wait on the “arc of the moral universe” to bend toward justice; and yet, we still find ourselves asking, When? Will? It? End?

Weeks into the COVID-19 Pandemic, when we were all committed to quarantining.  I began to realize that there was a certain degree of peace I felt in my son being home.  Quarantining, even with all of it’s inconveniences: the racial disparities, the challenges of distance learning/’homeschooling’ and the endless work from home Zoom calls,  meant that day after day, my son, my nephews, my brothers, my cousins, my uncles, and most of the many black boys and men whom I love from the top of their heads, to the tip of their toenails, were home.  And while being in their homes, doesn’t guaranteed their safety, it at least greatly decreases their chances of being put in a stranglehold, and never returning.  Being at home, gives them, and those who love them, the space, and room, and the peace to breathe.

I didn’t know Elijah McClain personally, but I know that I don’t want to ever forget him. I know through information that his mother and others shared about him, that he taught himself to play two instruments, one was the violin, which he played for homeless cats at the animal rescue shelter so that they wouldn’t feel lonely.  I know that just about all of the photos of him online show vibrant eyes and a genuine smile. I know that before Juan called 911 and told the 911 operator “he looks sketchy,” Elijah was likely just being fully present in a rare and unencumbered moment of Black Joy.  And I know intuitively that in the moments that he was pleading with the officers, giving them every reason why he was not a threat, and letting them know that he was “just different,” and telling them that he couldn’t “fix himself,” Elijah wanted so desperately to live, but I know that he knew then, that he was going to die.

Police officers are vested with the ultimate power. The power to take your freedom, and the power to take your life.  That sort of power, within a criminal justice system, built on a history of racism, bias, and inequality, will always lead to a disparaging difference in the loss of freedom and death for Black people.  And this is why we must watch the footage, hear and tell, and retell these stories.  This is why we cannot cease collective revolutionary antiracist efforts in pursuit of police reform and social justice. We simply cannot give up this fight. For this is why we must hold the line, and lift our voices, and plant our bodies firmly in the lines of protest, and stay the course. So that we don’t forget exactly what is at stake here.

And though it invokes in us, a near unbearable pain, we cannot continue to look away, lest we inevitably forget how fragile* we are, and be the very next to lose our breath. And this is precisely why we say their names.

Stacey Joseph is among other things, a Blogger, Social-Reform Advocate, Anti-racist, and Clairsentient Somatic Teacher. She is also the Founder of ImpactEDI™ – a social benefit startup, that partners with organizations and individuals around the work of equity through diversity, inclusion, and creating safe spaces of belonging.

Artworkcredit: “We The People” a series by Howard Barry of HBCreative. You can find Howard Barry’s work here.

*”Fragile” is a song written and performed by English musician Sting from his second studio album …Nothing Like the Sun. The song is a tribute to Ben Linder, an American civil engineer who was killed by the Contras in 1987 while working on a hydroelectric project in Nicaragua.The Contras were various U.S.backed and funded right-wing roups that were active from 1979 to the early 1990s in opposition to the social reconstruction of Nicaragua. During this time, the Contras committed numerous human rights violations and used terrorist tactics. The reference is made here to call out the various terroristic tactics used in the policing of people in America by overfunded law enforcement institutions.